Disciples: Sacred Lands is a great fantasy strategy game that has obviously borrowed concepts from the genre's Top Dogs, Warlords and Heroes of Might and Magic, but also introduces a lot of new ideas to the genre.

Rather than controlling huge numbers of units and lots of armies, Disciples keeps things simple. Each army can have up to six units, including a leader. There are also garrison troops to defend a town. There are five different leader types: warriors, scouts (archers), and mages, plus two 'special' leaders, the thief and the 'claimer' who can claim land by planting rods, thus capturing important resources for the army. Each of the four sides has unique units with their own special attributes and attack types. As your armies kill the enemies, the units earn experience and can improve in their abilities.

Similar to the heroes in Warlords, leaders gain an extra skill every level which include the ability to use certain magic items, lead additional troops in battle, or improve their statistics like damage done or hit points. You get to choose the skill you want to learn each time a level is made. Units also improve, and the neat thing is that you can decide on a path they will take when they upgrade. By constructing buildings in your capital, you choose the way all units of a type improve. It's an interesting system that works very well.

Speaking of mana, there are a large number of spells to play with in four different schools. Each race specializes in one school, but you can find or buy the ability to use other spells in some maps. Spells impact the main map, either by directly attacking an enemy stack, improving the attributes of one of your armies for a turn or revealing or covering the map in some way. I like the variety of spells, which are critical to success in many maps.

Combat itself (which resembles Heroes of Might and Magic in format) does not allow spells, and has at most 12 units involved. Each army has two rows, you can only attack units in the front row unless your attacker has a ranged attack ability. So, despite the fact that there are only a few units and they don't ever move in tactical combat, there is surprising depth to the tactical combat. Most maps are challenging even on 'easy' setting. The difficulty level seems to impact only the costs of building units/buildings rather than enemy AI. But the AI is competent, although it could be more aggressive.

One complaint I have about the game is that most missions are very long. Worst yet, some of the maps are used in more than one campaign, as you play the same battle from different perspectives. This makes the game a bit repetitive, and limits replay value.

Despite this fault, though, I really like the elegant game design of Disciples. It doesn't get bogged down in needlessly complex details, and there are many nice touches in the game, including excellent hand-drawn portraits that depict units in battles, and inventive spells. The included map editor and excellent multiplayer mode offset limited long term play value of single-player campaign. Definitely a sleeper that deserves much more attention from HOMM fans. Two thumbs up!

There is no comment nor review for this game at the moment. 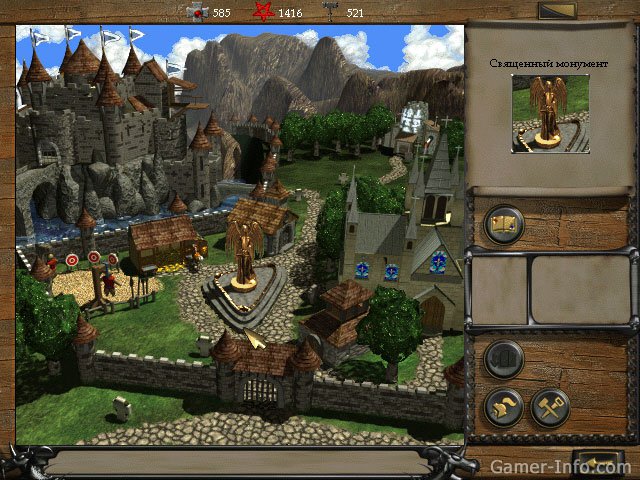 Disciples: Sacred Lands is available for a small price on the following websites, and is no longer abandonware. GOG.com provides the best release and does not include DRM, please buy from them! You can read our online store guide.

Some of these file may not be included in the game stores. For Disciples: Sacred Lands, we have the following files:

This page is a stub: it lacks content and/or basic article components. You can help to expand this page by adding an image or additional information.